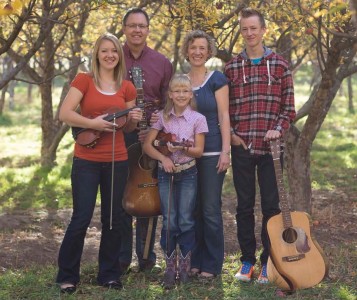 The Geslison family has been playing music together since 2004 when the youngest child, Ellie, was only 2 years old. Alina, the oldest sibling, is a 7-time state champion and a 3-time national champion fiddler. Alina has been playing the fiddle and violin since age 5. She is a student at Brigham Young University in Provo, Utah. Isaac, the middle sibling, is a 4-time state guitar champion. He attends Timpview High School in Provo, Utah. Isaac has been playing guitar since age 5. Ellie, the youngest sibling, is a 2-time state “small fry” fiddle champion. She also finished in 6th place at the small fry national fiddle championship in 2012. Jeanette, the mom of the family, is a dancer by profession, but she is also a bass player and a rather talented bodhran player (the bodhran is an Irish drum). Jeanette teaches dance at Brigham Young University. Mark, the dad of the family, has been involved in music most of his life. He has won more than 20 state championships on guitar, mandolin, and banjo. He has directed the Folk Music Ensembles program at Brigham Young University since 1992.

The Geslison Family plays such styles as: Irish, Scottish, Cape Breton, and Bluegrass. One of the specialties of the band is the “Hoedown.” A hoedown is like a barn dance. Jeanette teaches old-time dances such as: Virginia Reel, Oh Johnny Oh, Oh Susanna, Cotton-eyed Joe, Cumberland Squares, and many more circle, square, and line dances. Many of her dances are also known as “Contra” dances. Contra dancing is the predecessor to America’s traditional barn dance, or hoedown, style. It originated in the countryside of England and eventually came to America with the many British Isles immigrants who came to America during the 15th-19th centuries. To hear some of the music, and to see some of the dances taught by Jeanette, please visit the Barn Dance Videos page on this website. The first half of each video shows Jeanette teaching the dance without music. The second half of the video shows the dance with live music.

To get more information on the Geslison Family Band, or to book the band for an event, go to the Contact page on this website and send an email with your questions. You can also call Mark directly at 801-691-6940.